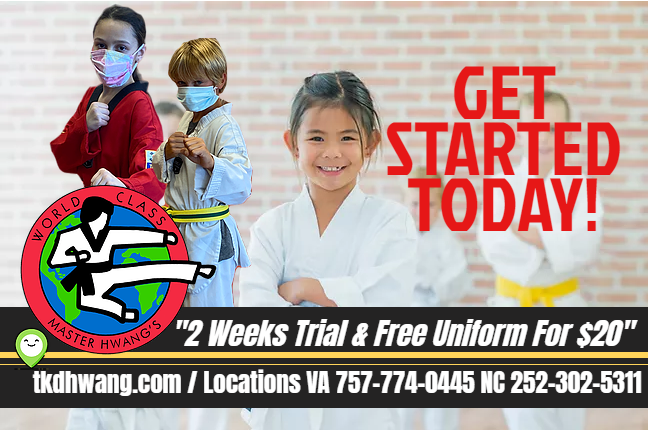 CALL US TODAY FOR MORE INFORMATION!

By opting into the web form above you are providing consent for Master Hwang's World Class Tae Kwon Do to send you periodic text messages. Standard rates may apply. You can reply HELP at anytime or learn more. You may opt-out anytime by replying STOP.

This was our first experience with any form of martial arts, and we did it as a family! LOVE everything about it! The energy and encouraging atmosphere is refreshing, and the values we try to instill in our kids (respect, discipline, courage, and teamwork) are reinforced in these classes. Couldn't be more excited to do more classes!

Master Hwang's World Class Tae Kwon Do is a wonderful school. Master Hwang is a great instructor along with the other instructors. I have practiced Tae Kwon Do for over 20 years to include multiple schools in the US as well as in Uijeongbu, South Korea under Grand Master Chong Hak Lee, and I can say that Master Hwang provides some of the best instruction I have seen in any school.

The instructors do a great job adapting instruction to the individual and they have classes covering all ages.

I would recommend this school to anyone no matter age or experience.

Master Hwang and Jordan are so great! My boys are always so excited to go to class and learn new things each time. Their confidence level has gone up in a short amount of time. They are learning so much respect and discipline which is so important for young boys. So far so good

Master Hwang runs a tight, disciplined program and he and Emily require tough workouts. My daughter greatly respects him and her manners—which were already quite good—have gotten even better. Our whole family also appreciate his teaching of discipline with his ability to show a great sense of humor.

I never thought my daughter could maintain such high levels of focus, in a group, for an hour straight.

If you want your child to learn: focus,confidence, discipline, goal setting and achieving, and work ethic, this program is a good choice.

If you want your child to get exercise, improve hitting and kicking strength, and achieve a level of self-defense competence, this class is for you.

Isabella absolutely loves her class. Great instructors that are very good with children of all ages.

We just started Master Hwangs class and my son is already captivated by the skills of the instructors and wanting to learn more! Master Hwang and his staff are kind, respectful, passionate about what they do, and I can’t wait to see my child grow in the field through this school!!

A native of Seoul, Korea, Master Hwang began training in Tae Kwon Do at the age of 7. His diligent training earned him a black belt in multiple Martial Art forms and a full four-year scholarship to the leading Martial Art University in Seoul, Korea. Shortly following graduation, Master Hwang was personally selected from among thousands by Grand Master Sun Chong to join the World Class team in the USA.  He is now the Master Instructor, and proud owner, of his own World Class UNI Schools, where he is passionate about sharing his knowledge with the next generation.

Upon graduating high school, Master Hwang was accepted to Young In University. Established in 1953, Young In University is Korea’s premier school for Korean athletes. Its varying athletic programs have produced countless international competitors and Olympic team members in every sport. While there, he was a member of their International Demo Team, where he competed with other athletes from all over the world. Master Hwang graduated as Valedictorian of his class in 2001.

As an instructor, Master Hwang has held the position of Head Master for the World Class Tae Kwon Do Centers in Buffalo, NY. Under the guidance of U.S. National Team Coach Grandmaster Sun Chong, Master Hwang oversaw the development and design of curriculum and teaching plans for over 2,000 active students. Master Hwang is a highly dynamic demonstrator and teacher. His phenomenal level of skill and energy excites students for every single class. With his experience and mastery of several forms of martial arts, Master Hwang is dedicated to helping every member of the school to gain the maximum benefit from their training.

Tae Kwon Do has a rich and varied history. It began 2000 years ago as a form of military training, developed into an Olympic sport, and has become popular throughout the world as a unique form of fitness and self-improvement. Millions of students of all ages have benefited from practicing this fascinating Korean Martial Art.

The system of Tae Kwon Do taught at our schools is the result of many years of study and experience. Our staff continue to train and research so that our centers will offer the most beneficial and effective instruction to our students.

We are very proud of our schools and our staff. They are among the most qualified, skilled, and hardworking Tae Kwon Do teachers in the country. We are all committed to providing you with a “World Class” experience every time you walk through our doors.